Do I Need Insurance if I Don’t Drive My Car? 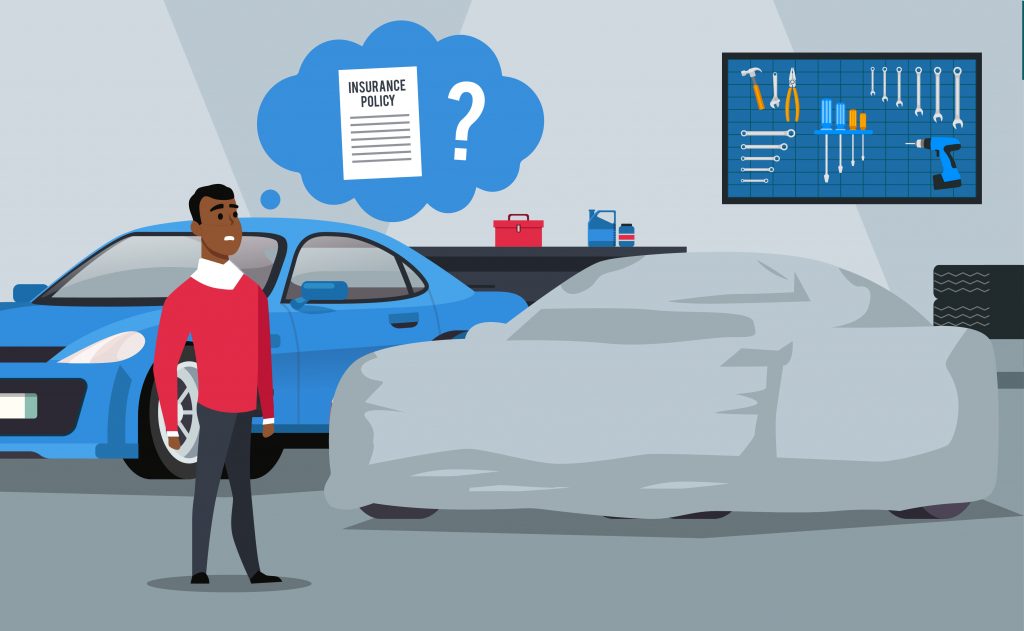 Typically drivers insure cars to handle the risks they face on the road. But what happens if a car will not see any use for a while? In other words, do I need insurance if I don’t drive my car?

Insurance Rules When a Car is Not Driven

As with most insurance answers, it depends. But most often, if the car has registration, it needs insurance. And many states demand that a car have registration even if not in use. However, there are exceptions and ways to work around this.

Exceptions That Allow Not Having Insurance

The most obvious exceptions to this rule are in New Hampshire, Virginia, Texas, Arizona, and Mississippi. In New Hampshire, insurance is not required even with a driver using the car. Virginia allows the same if a driver pays a $500 uninsured motorist fee. Arizona, Mississippi, and Texas demand a bond or deposit. The downside is that those can be more expensive than insurance.

Aside from those edge cases, there are a few other ways to circumvent having insurance with a car in storage.

In some states, including Alabama, Arizona, Colorado, Indiana, Louisiana, Nebraska, Oklahoma, Missouri, New Mexico, and Nevada a driver can file what is often known as an Affidavit of Non-Use (ANU). This notifies the state that the vehicle will not have insurance and will stay off the road. The driver will often have to pay a small fee, turn in any license plates, and not drive the car for at least 6-12 months.

California also requires an ANU. But what if the driver also wants to skip registering the car? They can designate it as Planned Non Operation (PNO) for $22 a year. As is also the case with ANUs, the driver will often need to return the license plates. They will also need to keep the car parked off of public roads. 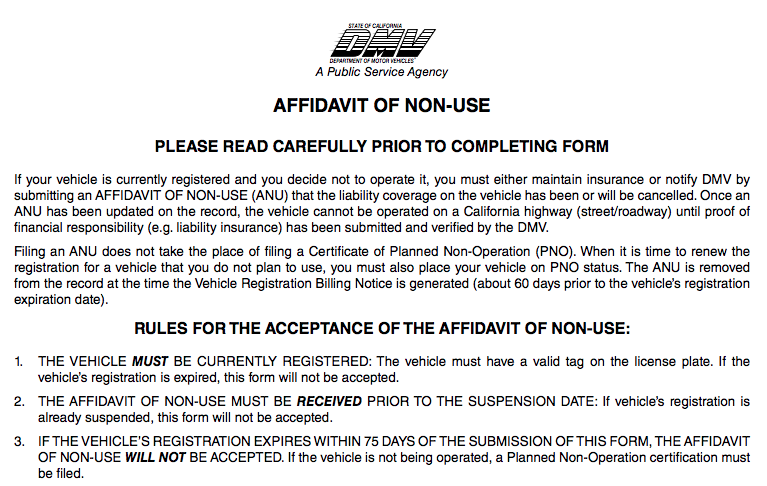 Sample of California’s Affidavit of Non-Use

If a driver cannot avoid insurance, there are ways to lower costs for any unused vehicles. We cover the primary ways to get cheaper insurance elsewhere. But in this situation, the best option is to seek “storage” coverage. Offered by many (though not all) insurers, this type of policy provides comprehensive coverage and nothing else.

Comprehensive coverage protects against risks a car faces unrelated to driving the car. Theft, vandalism, trees falling, floods, hail, and fires all fall under this umbrella. Someone else running into your car, however, would not. Hence, most (if not all) policies require that drivers keep the car parked off the street, away from such dangers.

If a driver has no off-street parking available, their options are more limited. In this case, they will also need to carry liability coverage. Collision coverage may or may not also be required if the car is being financed with a loan or lease. The liability coverage will not likely come into play with an un-driven car. But the collision coverage can come in handy if someone crashes into the car while parked.

Own Car But Someone Else is Driving it

In most cases with this scenario, the one who will drive should take out a “Non-Owner” insurance policy. Or, the owner could seek a policy and have themselves excluded as a driver. However, reports indicate that only some insurers allow this. And if they did, the owner would naturally have to list the person who would be driving as primary.

If possible, avoid canceling a policy altogether. For one thing, it is against the law in some states. For another, not having a policy any amount of time leads to a lapse in an insurance record. Insurers see this as a risk factor. Even a lapse of a day between ending one policy and beginning another can raise rates.

The only exception is that a few insurers will let a driver backdate a policy and pay for the uninsured time. In the cases where they do, it will only be if there were no accidents during that time. They also typically will not do it past a certain window of elapsed time (often 30 days).

Rules vary by state in this regard. In some states, registration is effectively suspended via ANUs and PNOs (discussed above). With other states, different rules prevail. In Connecticut for instance, a driver can put their registration on “hold.” They then get a refund if the car remains unused for a year or more. The best approach is to seek out a specific state’s DMV for their policy on this.